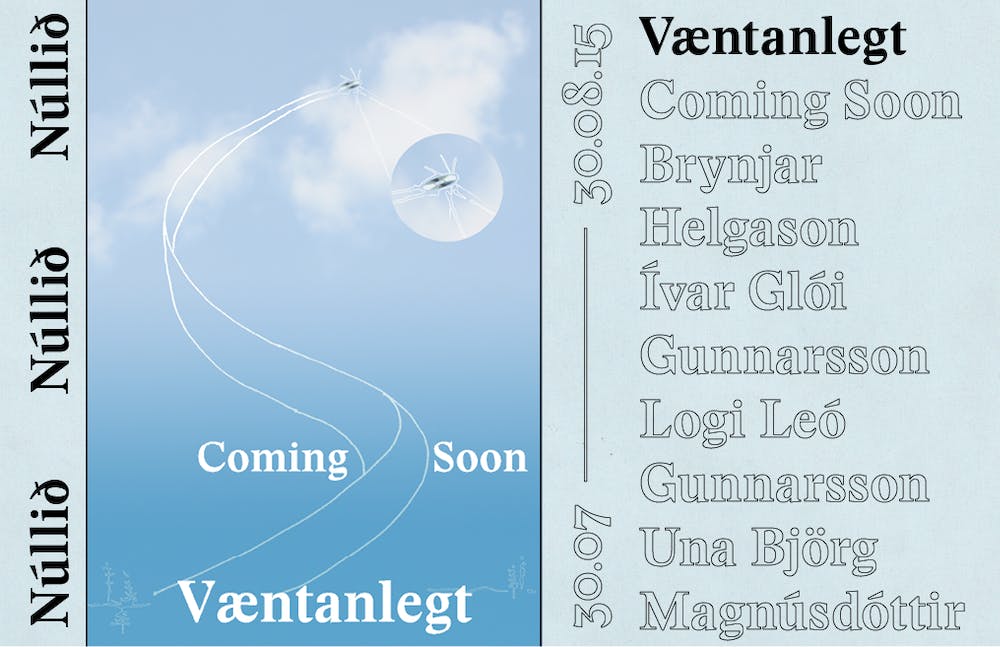 The exhibition is the first one to open the newly renovated project space – Núllið, Bankastræti 0, 101 Reykjavík.

Brynjar Helgason (b. 1991) lives and works in Amsterdam, doing his art. He exhibits it there and in Switzerland, Mexico, Poland, Germany and now once again in Reykjavík where he is from. „This has a special sentimental value for me!“ Also he exhibits his work indirectly and directly on the world wide web.

Ívar Glói Gunnarsson (b. 1992) graduated from the BA program in Fine Arts at the Iceland Academy of the Arts in 2014. Recent exhibitions include Out of the dark into the green at k18 Project Space, Berlin, From Brda w. Love in Room 312, Hotel Brda Bydgoszcz, At the Pizza Hut, Amsterdam and So so so at Safnahúsið. This summer he is part of a group exhibition organized by Kunstschlager at the Reykjavík Art Museum. Ívar Glói will start his MFA studies at the Malmö Art Academy next fall.

Logi Leó Gunnarsson (b. 1990) graduated with a BA in Fine Art from the Iceland Academy of the Arts in the spring of 2014. Recent exhibitions include Friendship at Anarkía artspace in Kópavogur, So so so at the Safnahúsið in Reykjavík, and Rousseau screening at Kim bar in Berlin. His works have been published in the Listvísi magazine and the book Difficulty of Freedom/Freedom of Difficulty as well as recently contributing to the print collection Thirteen prints published by Týsgallerí and the Iceland Academy of the Arts.

Una Björg Magnúsdóttir (b.1990) graduated with a BA in Fine Arts from Iceland Academy of the Arts in the year of 2014. Since then she has lived and worked in Reykjavík. Recent exhibitions include Tender bend (solo) in gallery Kling & Bang, Wavering at Artclick Daily, So so so at Safnahúsið, Culture House and Veldi at Skaftfell, Center for visual art in East Iceland.